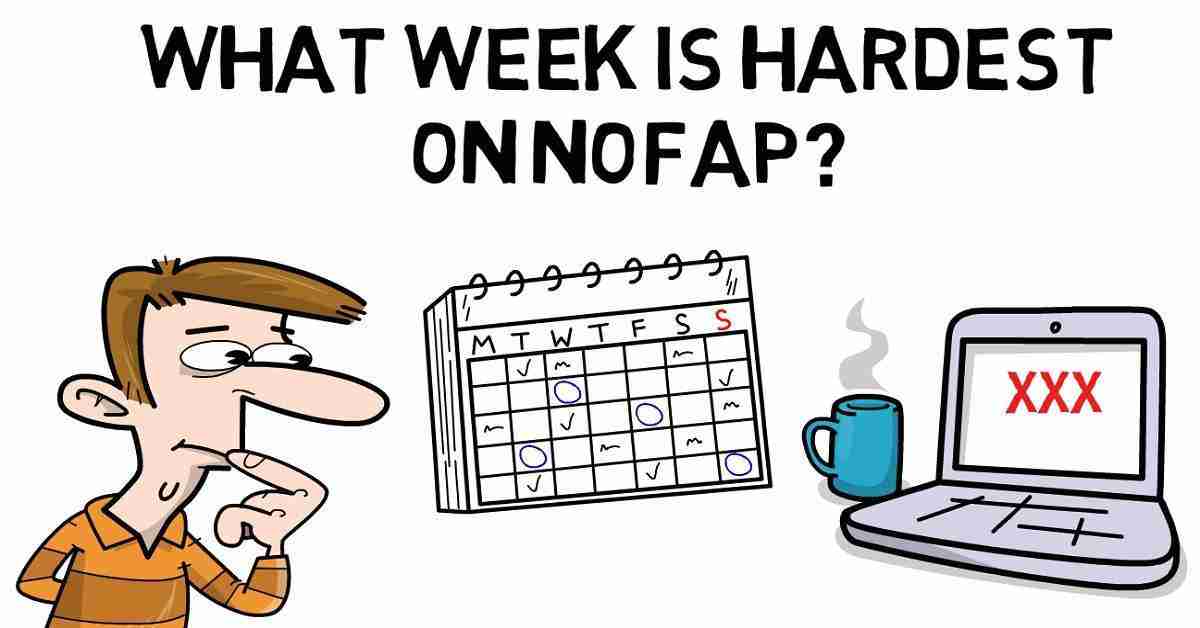 When is NoFap The Hardest?

So you keep relapsing and now you wonder if your pattern is normal, right?

You are wondering at what point NoFap is hardest, hoping the answer will reveal exactly the period you most often relapse. That way you can at least feel a bit better about it since, hey, it's the hardest part of NoFap, after all.

NoFap is hardest during the first two weeks. If you're not used to it, the first two weeks can be tough as hell, no matter if you're addicted to adult sites or not. Personally I find the second week of NoFap to be hardest, but most guys actually rate the first week to be the toughest.

What week of NoFap is hardest?
This is what my subscribers think…

Since most of my YouTube videos are about NoFap / pmo rebooting over 99% of my Subscribers are doing NoFap. Or, trying to do so, as many of them keep relapsing.

So what better audience than them, to ask this question.

I asked them what week they find NoFap to be the hardest, and this is how they responded….

At what point is NoFap hardest for you? 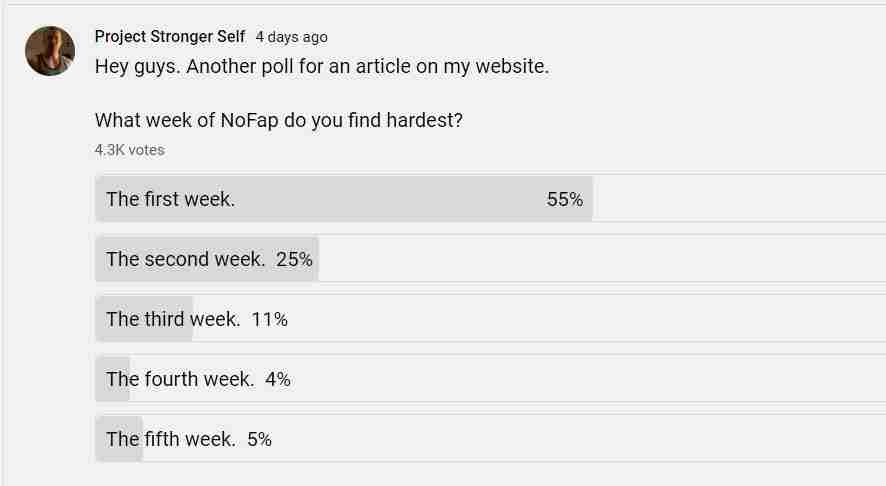 More than 4300 people voted and here's the result…

As you can see, a clear majority think the first week is the hardest week on NoFap.

The second week follows next and only 11% feel that week 3 is the hardest.

“Third week for me is when the benefits start to slow down and my mind questions whether it's worth it.” -Adam Pattinson-

“The first week is literally the setter for your streak. You get the first week down, I guarantee u, 80% after it will be easier imho. It’s still possible to relapse ofc no doubt, but the VERY beginning is the toughest because psychologically you tell yourself when u get urges that I can just start over again and I’ll be back in no time. While if you’re on day 30 or day 50, even if the urges are extremely strong, you’ll DEFINITELY think twice of relapsing because you’ve passed a good amount of days already. I always tell myself this that if I get the first week down, 80% of continuing after it will be easier. Again this is my opinion, I’ve noticed this for the past 3 years now. Every time I start a streak, 1 week in is the first stepping stone. I hope this helps.” -Umar Habib-

“Week one is hell for reset” – Will Winters-

“It's always on the 10th day when I relapse” -Jesper Cook-

“For me dopamine levels drop for 5-6 weeks or more, I was on day 50 once and still had low motivation and depression, so I don’t know when it gets better” -Luka Zaridze-

Thank you to the guys who participated in the poll…

Why I personally feel the second week is the hardest…

This means A LOT of relapses and thus I also had many streaks.

And most of the time I found the second week of NoFap to be the hardest because it was often then when my mood plummeted.

In my videos on my YouTube channel I used to call this period “the void”. Simply because it felt like an emptiness, like I had a black hole in my chest.

In terms of aggressive urges, the first week of NoFap was still the hardest…

Now when I say that I often found the second week the hardest I mean that most of my relapses happened somewhere in week two.

This doesn't mean that my urges were strongest in the second week, because the were not. They were actually strongest during the first week.

It simply means that the void that I felt during week two (and sometimes during week three and four as well) made me lose my fighting spirit and just “give in”, often even when having no urges at all…

…in fact, ironically, this happened more often than relapsing to urges.

However, I finally learned how to overcome that and today I have been free from my addiction for a very long time.

The reason for feeling empty in the second week:
Low dopamine!

Studies have shown that your already low dopamine levels drop even further when you quit an addiction.

This is temporarily, of course, but for many people they are at their lowest levels during the second week.

This is most likely also why so many people, including myself, felt this feeling of “emptiness” in the second week. Like nothing really matters.

Relapsing every 14th day is not good enough…

I'm sorry, but relapsing every other week is just not good enough.

This means that, if you have a tendency to, during those low points in the second week, start having thoughts like “oh man, what's the point, I might as well give in here”, then you should know that right then might actually be the worst time for you to relapse!

…your brain knows it can always go back.

At what point is NoFap the hardest?
Conclusion and final words

So to sum it up, it's different for everyone, but the majority of guys doing NoFap find the first week to be the absolute  hardest one.

P.S. If you need help with relapses, feel free to reach out to me through my contact page right here.

Here are some other posts you might find interesting…