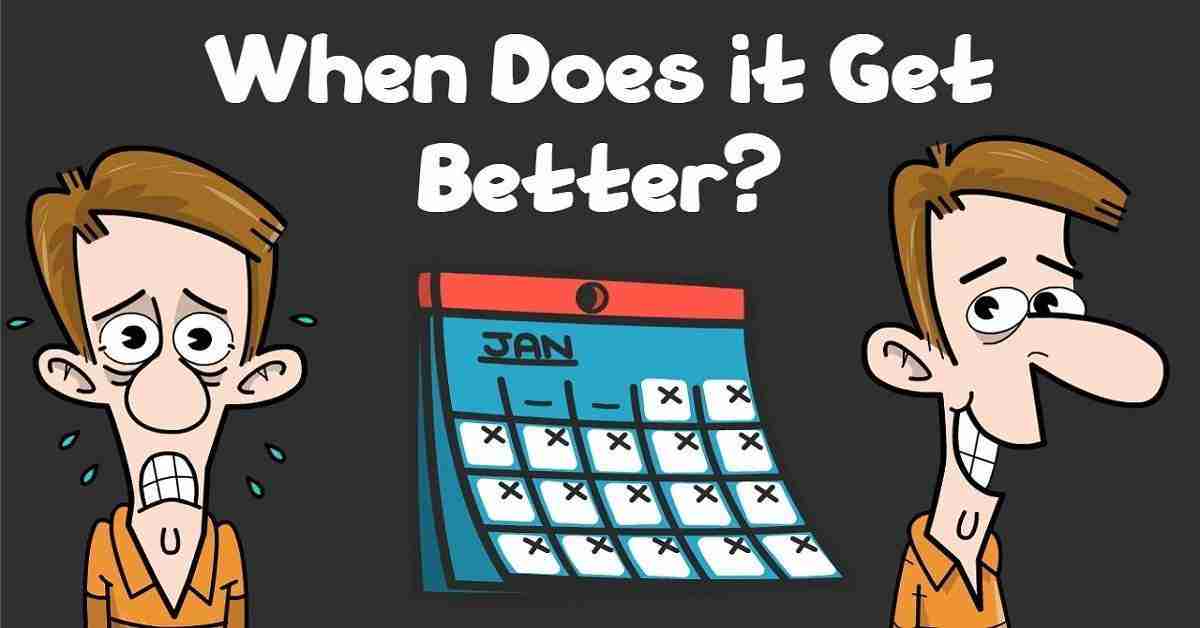 NoFap – When Does it Get Better?

So you have embarked on this amazing NoFap journey and it's not really going as well as you expected, huh?

Perhaps you are searching for things like “when does it get better on NoFap?”

Well, in this article you will find your answers because we are going to take a look at what other guys have experienced and then try to boil it down a bit.

…the are really, really inspiring.

So – What Do You Mean By Better?

First we need to establish what you mean by “better”.

Well, with the first two pointers, you could potentially see some pretty big changes. However, if you are waiting for the last one there then I'm sorry to say, you are totally setting yourself up for failure in life.

So, When Can You Expect it To Get Better on NoFap?

Now that we have got the “magic” part out of the way, let's take a closer look at when guys actually start to see some improvements.

I did a poll on my YouTube channel, Project Stronger Self, where I asked my subscribers to vote. More than 90% of my subscribers are doing NoFap so I have a great opportunity to do polls.

…here are the results: 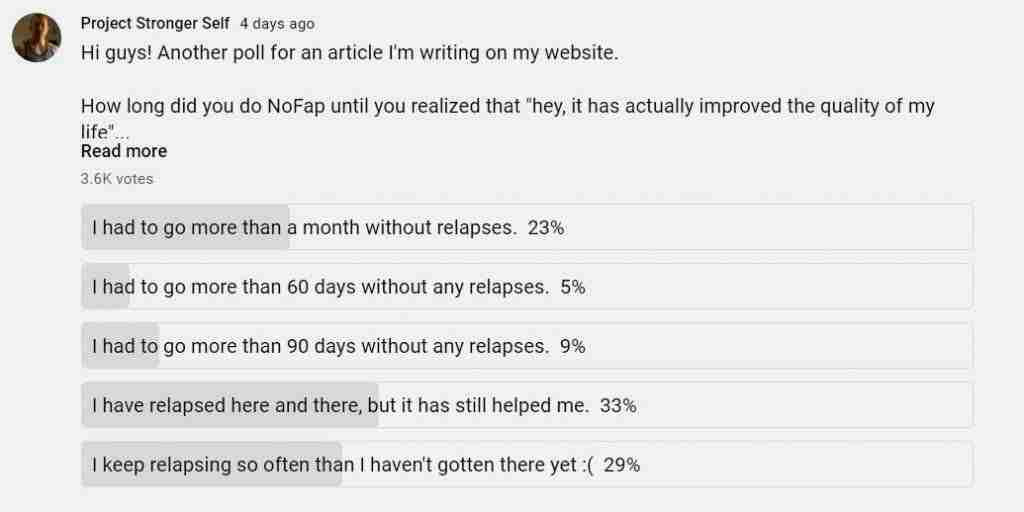 If you relapse, there's still hope…

If you keep relapsing once in a while, as long as the relapses are super destructive binges, and as long as they are not too frequent, it's still possible to experience benefits. Because, as you can see from the poll, 33% say that NoFap has improved the quality of their lives, even with some relapses here and there.

This, makes sense because in my videos I constantly keep telling them that guys who treat NoFap as a “lifestyle” are the ones who get the best results.

By the way, you can check out my YouTube channel and all the videos right here.

It takes longer if you are addicted

First, not every guy notice benefits from semen retention itself. However, those who do, and are NOT addicted to adult sites, almost always notice benefits quicker than guys who are addicted.

Not only that, but those with a real addiction often feel far worse after quitting (for a while) because of the withdrawal symptoms and the flatline.

On the other hand, the addicted guys potentially have more massive changes to come, as they are starting from a lower baseline than those who are not addicted, and compared to being down on the bottom, their new life will be absolutely phenomenal.

However, do know that not all men will experience benefits from semen retention…

…we are all different.

Watch this video for an example of a guy who was probably NOT addicted, but still saw big benefits…

On the other hand, those who are addicted often feel WORSE during the first two weeks than what they did back when they were using.  See related post: no PMO withdrawals

Unlike for the guys who are not addicted, for those who are  the first two weeks are actually the hardest.

They most often need more than a month just to start feeling a bit better and often up to 3 months or more to start noticing really big improvements. This is because it just takes a lot of time for the brain to rebalance.

But again; many addicted guys do start feeling a bit better after about 30 days. So if you think you might be adicted, hold on, things will improve.

Watch this video for an example of a guy who was addicted, as it took longer for him, but he changed his life…

By the way, if you wonder whether you are addicted or not, you can take the PMO addiction test right here.

It's different for everyone…

As you can see, there is a big difference between the guys in the two videos.

That is also true for everyone else in the NoFap / no PMO community.

We all have different brains, lives and fapping history, so obviously it is also going to differ in terms of when we see benefits.

NoFap How Long Does it Take?
Final Words…

I made this blog post shorter than my usual posts because I know most guys are in a hurry and don't really want to take the time to sit down and spend a good 20 minutes on reading an article.

However, if you want to take a deeper dive, I recommend you read some of my earlier posts…

I'm sure you'll find at least something there of interest.

P.S. Need my help? You can click here to check out what kind of help I'm currently offering…