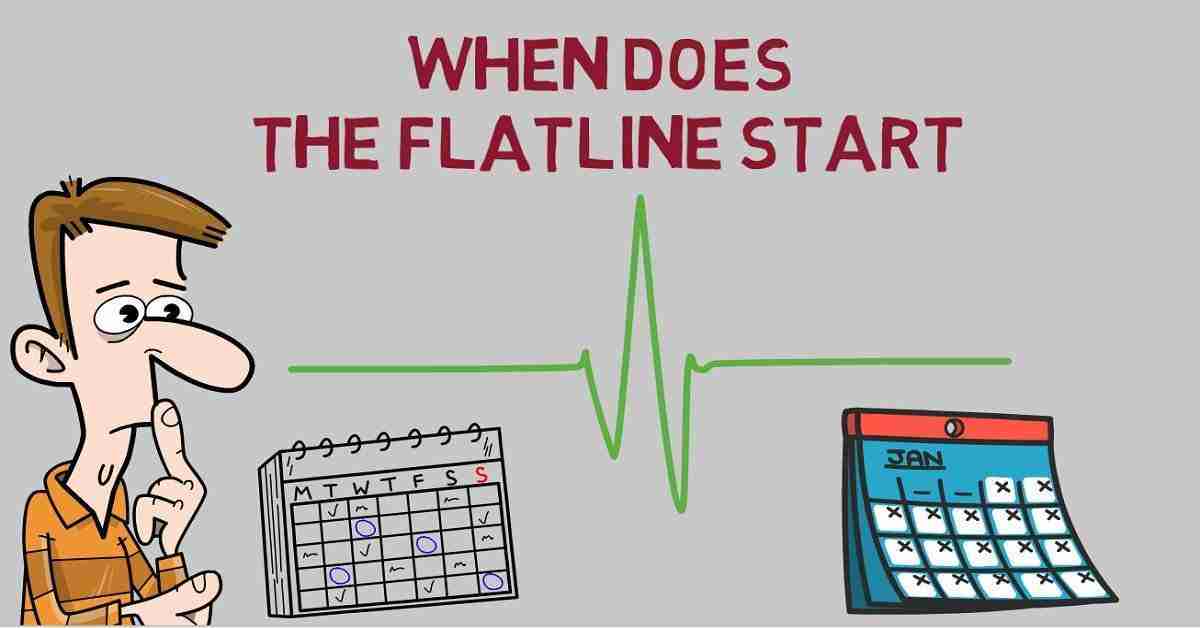 NoFap – When Does The Flatline Start?

You might want to book mark this page because here you will discover all kinds of helpful info about the NoFap flatline.

When Does The Flatline Hit?

In fact, I did a poll on my YouTube channel Project Stronger Self, and this is how my subscribers responded. 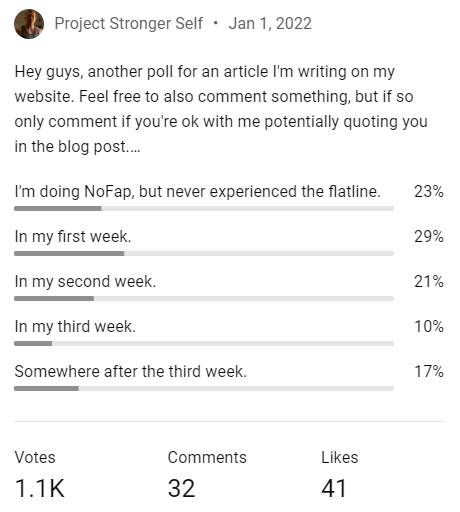 As you can see, more than 1100 people answered and here are the results…

The NoFap Flatline Started in The Second Week For Me

Back when I was struggling with relapses my self, when I was doing my own reboot a few years a go, my flatline almost always started in the second week.

This seemed to be the most common times for guys 7-12 years ago.

So, as I'm checking the results from my poll I have to wonder, what's the reason for it having shifted more towards the first week?

Could it be that today's young people are more messed up, since they've had access to even more nasty categories and even more stimulating adult sites than people had back when I started my own reboot in the end of 2012?

Perhaps more of them are so messed up that their brain is activating the flatline as soon as possible. Because my personal believe is that flatline is some kind of “defense mechanism” that is elicited by the brain…

…more about this further down in the article.

That said, it could still be that the second week is the most common week for the flatline to start, but the poll was just too small to present an accurate picture of reality…

…or that some guys just voted for the second week, because they have not been able to go for longer than, say 10 days or so before relapsing.

Not Everyone Will Have A NoFap Flatline 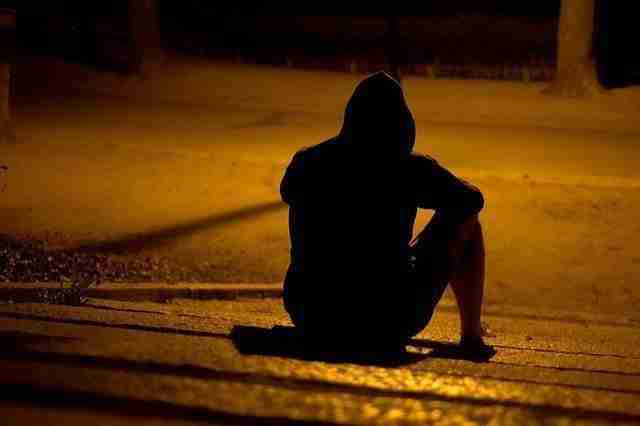 Not everyone who is rebooting will experience a flatline.

That was clear 10 years ago and it still seem to be the case. And this is something you can clearly seen in  the poll as well.

About 23% of my subscribers say that they never experienced a NoFap flatline.

The numbers may lie a bit…

Now, keep in mind that some people may have voted even if they relapse so often than they never gone a full month, or even two weeks, and thus they wouldn't know whether or not they would fall into a flatline further down the road.

But still, after having been involved in the reboot community for 10 years by now, I know that it is indeed a fact that not everyone will enter a flatline.

That said, I think people who aren't addicted can still get some form of a flatline, but most of them do not. And the ones who do seem to have a shorter and less potent flatlines.

How Long Does The NoFap Faltline Last?

The most common length of the flatline is anywhere between 10-70 days.

However, some unlucky guys will have to endure a much longer flatline than that.

I frequently see guys struggling 6, 8 or even 10 months in. Some are even struggling a year after quitting, but hose guys are in the minority though.

In most cases where the flatline lasts for more than I year, I suspect there might be other things underlying issues that either exaggerates the flatline itself or share the same typical flatline symptoms…

Our libido is a complicated thing and one can indeed find even more issues than what I just listed that can disrupt its mechanism.

When Does The NoFap Flatline Start?
Here's What A Few Of My Subscribers Are Saying…

Here follows a few comments from my subscribers.

Comments that they posted in the community section of on my YouTube channel Project Stronger Self.

“My flatline started after exactly 30 days. I am on 149 days now (my 2nd 150 day streak ever) and there are the occasional peaks only due of stress.” -Midhip Sport-

“On my last run (23 days) it started around day 8 or 9 by the start of the third week it was lifting but I relapsed sadly. I’m doing NoFap as a New Years resolution.” -Lanz-

“My flatline started after 35 days. Day 25-35 were incredible, I felt cured of all ailments. I sunk into the flatline after that and have not come out yet. Around day 200 at the moment. -pickitup619-“

“My flatline occurred starting from day 16 to day 24. At first my libido was off the charts for 2 days then it stabilized and began to rapidly decline. I lost a lot of motivation during that time, so it was hard for me to work out and meditate. Around day 21 or 22 I started experiencing the worst headache for the entire day. It was in the farback of the leftside of my head. The only thing that somewhat helped was meditating.” -Sulfuric Dude-

Download >>My FREE Guide<<  – How To INSTANTLY Get Harder Boners… “On my first NoFap run it started after 30 days, on the second and third after 2 weeks” -Udi Michaeli-

“My flatline usually kicks in around day 14-15. I feel like I don’t wanna do anything and that my head is a complete void” -chief beef-“

“Second week for for sure, Everytime. Start at the end of second week day14, relapse between 15-17. Weak week” -av sh-

As you can read in the comments above, it's very common that the flatline starts in the second week.

Which is why the comments reinforce my believe that the second week is perhaps the most common time for the NoFap flatline to start, even though the poll show a greater percentage on the first week.

I kind of suspect that a lot of people who voted for week one are guys who actually never made it much further than say 10 days or so, which would skew the results towards week one and not be that accurate…

…but then again, who am I to doubt my subscribers, so you go ahead and make of it what you want.

You Can Have Several Flatlines During Your NoFap Journey…

A lot of people have just one flatline, but it is still pretty common to experience several flatlines during a NoFap journey.

Some guys have their first flatline in the second week, get another 5 weeks in, and a last one around day 70 or so (this was just an example of how it can look).

If you happen to run into several flatlines, you can expect the ones happening later on be shorter than your first one. In general, the first one is the longest and most painful one.

Some guys can descend into a flatline even before quitting…

I suspect this is happening because the brain so desperately needs a break from all the extreme stimuli that it simply shuts down the libido.

Why Does The NoFap Flatline Happen?

I too have my own theory.

For sure, at least part of the flatline is withdrawal and low dopamine related and the last couple of years I have started to believe that the flatline is an extended version of what Richard Solom calls “the B-process” in his opponent process theory.

It would take much too long to explain in text form, so in order to learn what the opponent process theory is, take a look at this video I made a while back.

While you're watching, keep in mind what Judith Grisel (neuroscientist) has to say about addictions:…

In the book “Never Enough”, Judit talks about how the B-process can sometimes also be elicited in addicts, even without the A-process having been activated, merely if you're exposed to a familiar cue. E.g. like going to the bar, but without drinking (if you're an alcoholic)…

…the B-process was then triggered just by the brains association with the A-process.

If you want to discuss this further, you can reach out to me through my contact page right here.

When Does The NoFap Flatline Hit?
Final Words

It's safe to say that the flatline most commonly starts in the very end of the first week or in the second week.

Still, we are all different and for some guys the flatline starts in week 3-4 or even later.

You can also have several flatlines, but if you do, the later ones are often shorter than the first one.