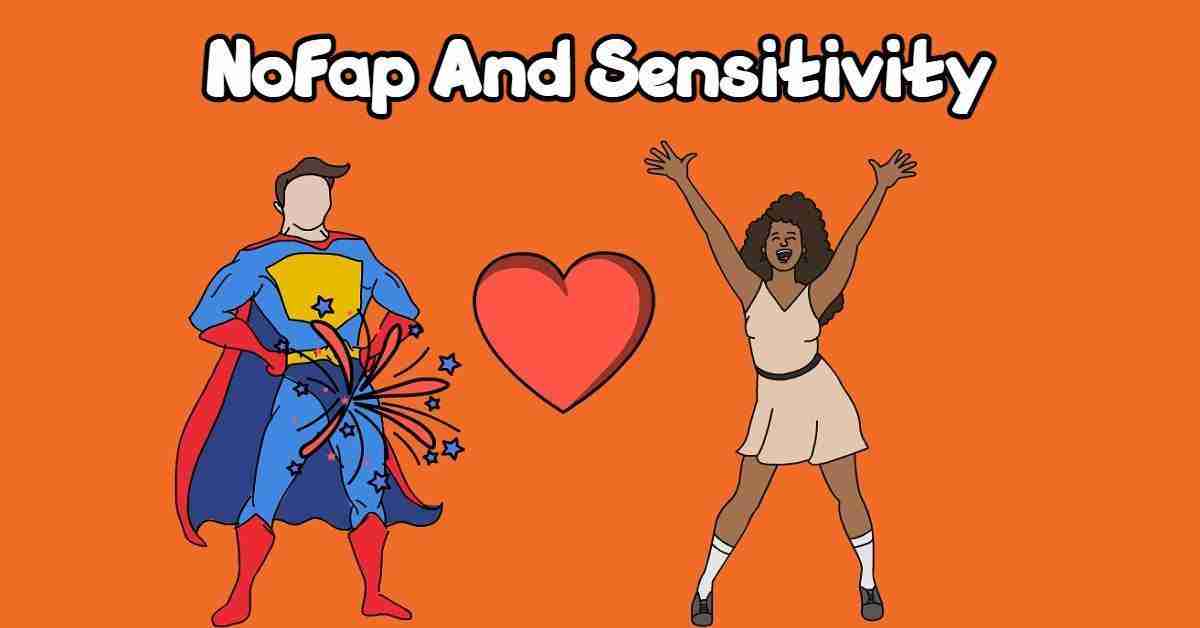 How Long To Regain Sensitivity On NoFap?

So how long do you have to do NoFap in order to get back your sensitivity?

Let's make one thing clear right from the start; by “sensitivity” we are now talking about how long you will have to do NoFap in order to stop feeling numb in your nether regions.

In other words, how long does it take in order for sex to start feeling amazing again?

NoFap How Long For Sensitivity?

Well, I did a poll on my YouTube channel asking my subscribers this, and here's how they answered…

This is How Long it Took For My Subscribers: out of all the people that voted 53% said that it took them less than for weeks on NoFap to start noticing better sensitivity in their nether regions.

Now, keep in mind that, while more than 90% of my subscribers do NoFap, not all of them participate in polls. So even though I had about 66k subscribers at the time of the poll, only 2000 people participated. 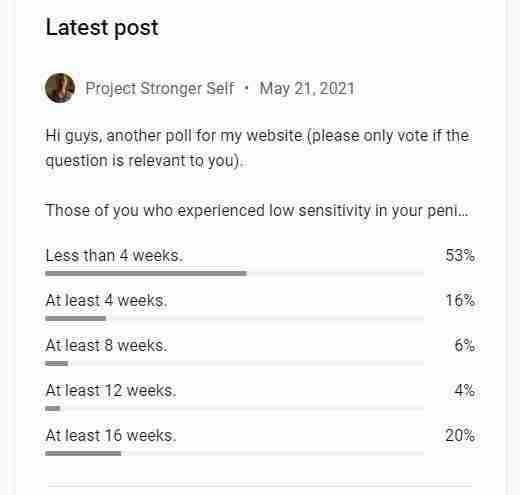 The question asked was;

“Those of you who experienced low sensitivity in your penis, how long did it take for NoFap to improve your sensitivity?”

Also, understand that not everyone who voted have developed addiction related brain changes and that the age span ranged all the way from 16 to 50+

So, obviously there is huge variations there.

I would suspect that the majority of the people who voted are not severely addicted, because less than 4 weeks seems to be quite a short time to start noticing improvements.

If you have developed a full blown addiction – it will take longer!

That siad, loss of sensitivity is indeed much more common for guys who have developed at least some for of addiction and if you consider yourself addicted, then you can probably add a few weeks to the average result you saw in the poll.

Addicted or not, by day 90, most people have started to see some pretty good progress, however, there is a caveat…

However, there is a caveat to the 90 day thing…

Guys who starter fapping to internet adult sites at a very young age, even long before they even had their first real kiss tend to take longer to recover than guys who started at an older age.

This is especially true when it comes to erection health.

For some guys – it can take up to a year…

So if you can achieve a somewhat solid erection, but you just lack the sensitivity, you will most likely never have to wait a full year and you should have started seeing good results by day 90. But even in terms of sensitivity, the younger you started the longer it seems to take to recover.

While you are waiting, it's important to keep living…

…which leads me to the next subheading…

Do NOT put your life on hold…

If you are unlucky enough to belong to the group of guys who take a very long time to recover, it's important that you do not put your life on hold.

And I'll tell you exactly why that is in this video…

So, after watching the above video you now understand why you need to keep living WHILE you do a PMO reboot.

Keep doing all the normal hobbies and things you like to do and not lock yourself inside your house, thinking that you have to reach a certain number of days before you can “start living”…

…and also keep dating, or seeing your current partner.

There is no need to rush sex, but if you can achieve an erection, there is also no need to abstain from it just because you lack a bit of sensitivity. In fact, for most guys slow and gentle sex will actually help speed up recovery.

Now, if you have to force an erection with for example hand stimulation and a death grip, THEN you would want to hold back on sex for a while and limit yourself to just cuddling and fooling around.

Limit orgasms in the beginning…

If you are having problems with weak erections and delayed ejaculation,  you may also want to hold back on orgasms for a while in the first months of your reboot and practice slow, ejaculation free sex, called karezza.

A natural product that could help you…

If you want something to help with your sensitivity during your reboot, then you could try a natural product called AlphaViril, which I personally found to significantly increase my sensitivity back when I did my own reboot.

It worked surprisingly well as, even though I was pretty desensitized, it also helped me achieve and maintain harder erections. If interested, you can click here to check current pricing at the online vendor.

Are supplements okay to use, though?

I consider tools like this okay to use during the reboot, just as long as one realize that rebooting is, and will always be, the real cure…

…everything else is to be considered helpful tools only!

By the way, if I use AlphaViril today, after having fully rebooted, oh man…

Is there any way of speeding up the actual reboot then?

There might be a few things you could try to help speed up your recovery, and now I'm not talking about tools to help with erection and your sensitivity, but things that might actually speed up the recovery process itself.

I talk more about what they are in the video below…

If you found the video informative, consider checking out my YT channel here.

Now, keep in mind that the things I talk about in the video are things that have not been studied on PMO recovery per se, but in terms of general brain health and upregulation of dopamine receptors they actually have some pretty solid evidence behind them…

…and as you probably now by now, downregulation of dopamine receptors is a big part of what's causing you to feel numb…

…both in terms of the ability to feel positive emotions, as well as in your beloved penis.

In conclusion, if you haven't developed addiction related brain changes, then expect to start noticing a return in your sensitivity already around the 4 week mark.

On the other hand, if you are addicted, then know that most guys in this group have started seeing some nice results by day 90.

If you belong to the the unlucky “long term rebooters” then it might take you up to 6 – 8 -10 months, or even longer for you to recover. But in general those are guys who also suffer from pretty bad PIED. Most guys who can get a good erection, but just lack the sensitivity, will have seen some nice improvements by day 90.