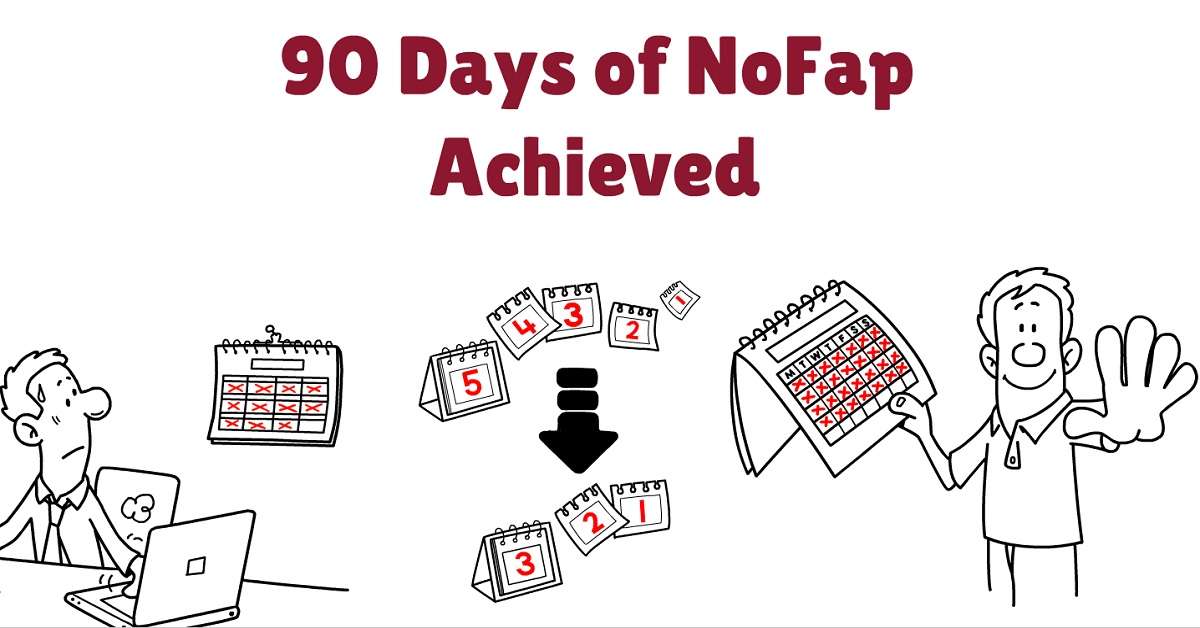 How Do You Feel After 90 Days Of NoFap?
(My Experience Plus Some Science)

So you're doing NoFap, but you still haven't been able to reach 90 days, and now you wonder how it feels to get there?

Well, I have personally had several 90 day straks in my life, and in this article I'm going to share my experience from a couple of them. They are not entirely identical, but the patterns they share are similar enough for it to make an interesting presentation.

Let's jump in right away…

The Road To 90 Days on NoFap Looked Like This…

Anyway, here is a video I created on my YouTube channel a while back, where I share what the first few weeks on NoFap felt like…

…hint: they were not fun!

The first few weeks on NoFap were hell…

You can read more about ProVanax on the NoFap supplements page

The beginning of my NoFap journey

Those were some things that hit me during my first 8 days or so.

Low dopamine is obviously one big reason behind why those nasty things happen.

During this period the procrastination subsided a bit, but instead it was like I often descended into a darker kind of depression.

I use to call this period “the void”, simply because it felt like a deep emptiness. And not in a good way.

For me, the first two weeks were always the hardest in terms of relapse risk. Sure the second week was easier than the first week, but it was still plenty hard.

But once I got past two weeks, it was always like I reached a new level, in terms of “being able to stay strong”. That said, I have relapsed many, many, many times past week 2 as well, so it's not like I'm saying it suddenly became easy. Easier, yes, but not easy.

Another thing to note here is that by this time I most often descended into a pretty deep flatline. For most of my loger streaks, the flatline lasted to around day 60-80, but I have been experiencing shorter flatlines even after that, sometimes pretty long after passing day 90 mark.

If you don't know that the flatline is, you can read more about it in the post, NoFap flatline, what is it and how to get out of it?

I'm not even sure if I should write that much about this period, as they tended to be a bit different during my streaks. However, one common pattern is that I started having much more drive to work on my goals.

And all those daily chores, that seemed to be taking a a humongous amount of effort in the first week, was now starting to become pretty easy. Even to the point of me often going: “why do I use to be I so unwilling to do this?”

How I felt after 90 days of NoFap Since I know you found this article by searching for: “how do you feel after 90 days of NoFap”, I'm not going to draw out on it any longer, but I'll go ahead and list all the actual benefits I felt after 90 days on my NoFap journey.

And let me assure you, I personally continued to experience even more and stronger benefits long after having passed the 90 day mark…

…so just keep going and it will… keep…getting… better… and better.

What NoFap didn't give me that I had hoped for…

There are also a few benefits I've been reading about over the years, that NoFap didn't give me. That I would have liked to get.

I think it's important to note that, while NoFap is great, it's not a magic bullet that will suddenly fix all problems in life. I mean, that should be bloody obvious, but sometimes people can become so dogmatic that I still feel it needs to be pointed out.

What to do if you haven't reach 90 days yet…

I'm Scandinavian Bob, and thanks for reading my post.