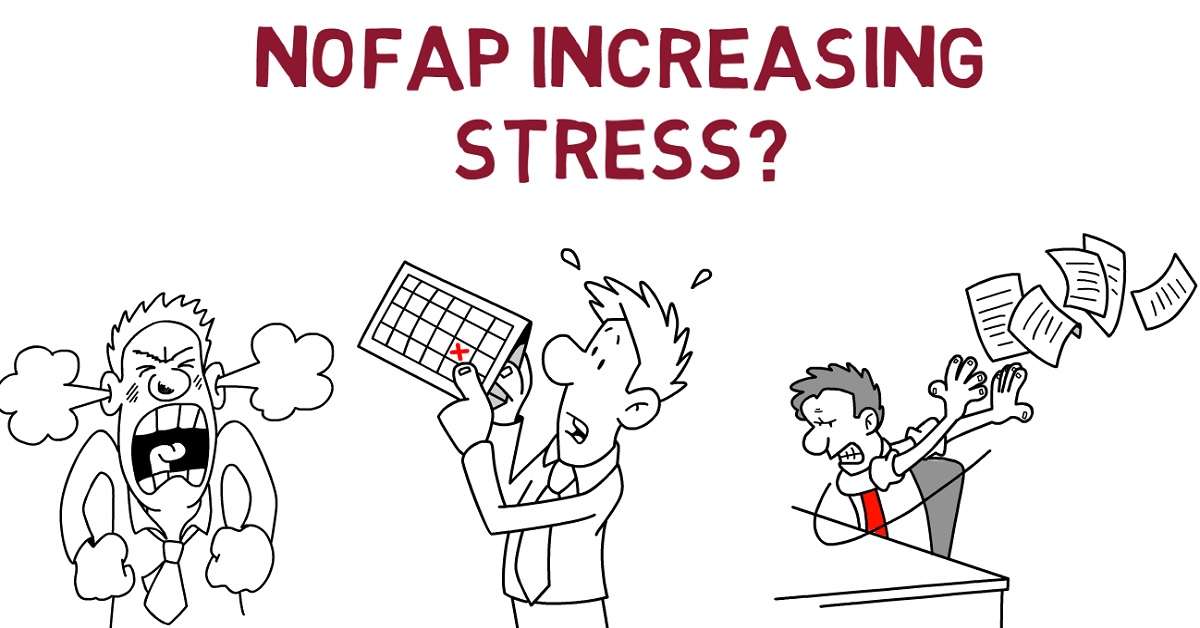 A lot of guys are doing NoFap in order to reset their dopamine system and to get a healthier sexuality. And by healthier sexuality I'm talking about rewiring their brain back to real life people instead of having their arousal primarily be responding to pixels on a screen.

How can anxiety and stress be both on the positive as well as negative effects list?

Now, notice how some of the positive and negative effects cross over.

This is because the rebooting process is not static. Things constantly fluctuate.

And sometimes we also perceive things differently depending on what “mood filter” we happen to view the world through on a particular day.

For example, some guys might interpret the increased energy, that often come along with semen retention, as stressful. Particularly if they don't put it to good use. While others may just feel like it's fueling them. More on this further down.

…other than sex, that is.

Here is a poll I made on my YouTube channel Project Stronger Self where I touch on this.

By the way, most of my YouTube followers are following a NoFap lifestyle (or at least doing it in cycles), so it really gives me a perfect opportunity to collect interesting data about all things ‘NoFap'.

I asked my subscribers the following question…

Do you find that NoFap increases stress?

Let's take a look at some comments a few of the guys left under the poll to see what they have to say about their experience with NoFap and stress, because the results truly differ from individual to individual.

What guys are saying about NoFap and stress…

“For me it is not stress but aggression that increases, unless I meditate and turn that into energized clarity” -John Xina-

This is a good point “John Xina”  comes with. Some feel the raise in energy that follows as a result of doing Nofap more as increased aggression. Others feel it more as nervousness, while some just get more work done thanks to that energy increase, even without having to try to purposefully redirecting it.

“It definitely causes more stress if I relapse. I will say I can get frustrated and pint up the second week in. It’s a very steep hill to climb. Once you can get past the beginning it definitely gets easier and stress is easier to manage.” -Cliff Champion-

There is no denying that relapses can cause, not just stress, but even guilt, shame and self-loathing, simply because guys want to succeed so badly and so the disappointment after a relapse becomes almost too much to bear.  This is very unfortunate since beating oneself up is not helpful in any way shape or form and can even cause depression and a reduction in self-esteem. It's understandable, but it's not helpful. A lot of NoFappers have a tendency to be very self critical.

The irony here is that many people think they need to be very hard on themselves in order to not slip and start relapsing. But often what people find is that, if they can just learn how to forgive themselves quicker and adapt a more understanding mindset, relapses actually tend to reduce, not increase. Easier said than done, though, I know, since I've been there myself.

“Nofap brings out all of the feelings you try to runaway from.” -J Move-

Here's another one who have noticed what we just talked about above. I wouldn't really put it like  ‘brings them out', but it's more like you stop masking them, or stop running away from them. Which, again, is a good thing.

I agree. Physical exercise is one of the best ways to put all that increased energy to good use. By doing that you get better results in the gym too. Or with whatever from you exercise you're doing. Or, at least, most people do.

Another good point right here. After an orgasm many of us actually feel a bit more relaxed for a moment. Take that away and you lose that relaxation, unless you find other tools to relax with. Which, luckily, there are plenty of out there.

“It's like stress levels or the amount of stress triggered by the same actions is the same but i just keep going deeper into what i am doing like stress isn't an issue which results in reaching higher levels of stress.” -Slach M M-

“The key is not to think about No Fap at all. It will stress you up if you keep thinking about it all day. Instead, just focus doing your job, do exercise and weightlift in gym daily if possible, do practice in skill you want to have, simply make yourself busy doing useful activity that your future self will thank you for.” -Muza Zaini-

Focusing on what you want to achieve or move towards is for sure a much healthier approach in life in general, than to only focus on what you DON'T want to do. I 100% agree. Good stuff, Muza!

“It gives a lot of stress, during the first week's and flatlines, but it is actually the effect, we want. During those Flatlines, our Dopamine receptor's heal and it gives therefore less long term stress” -konuralp-

I'm happy that somebody brought up the flatline, because it is indeed true that the during the flatline our emotions can go all haywire, with sharps ups and downs, often with the negative emotions amplified. Most often the anxiety and stress some people experience during the flatline will start to reduce by the fourth or fifth week, though, so just keep truckin, guys!

In conclusion, and based on everything I have seen and read, from having been 10 years in the NoFap / rebooting community it's safe to say that NoFap generally reduces anxiety from most guys, and does not increase it, if they can just give it a long enough try in order to get past the initial withdrawal symptoms.

That said, then there are also guys who experience an increase in stress or aggressiveness even past the initial phase if they don't learn how to channel the increased energy into other things, like working on your goals, lifting, yoga, running and things like that.

The increase in energy seem to affect people differently, though, and some guys can just seemingly take advantage of it, even without putting any effort into trying to transmute it.

As it so often goes to show, we are, and will always be, different.

P.S. Need my help with your reboot? If so, you can click here now to check what current help I'm offering.

Here are some other posts you might find interesting…