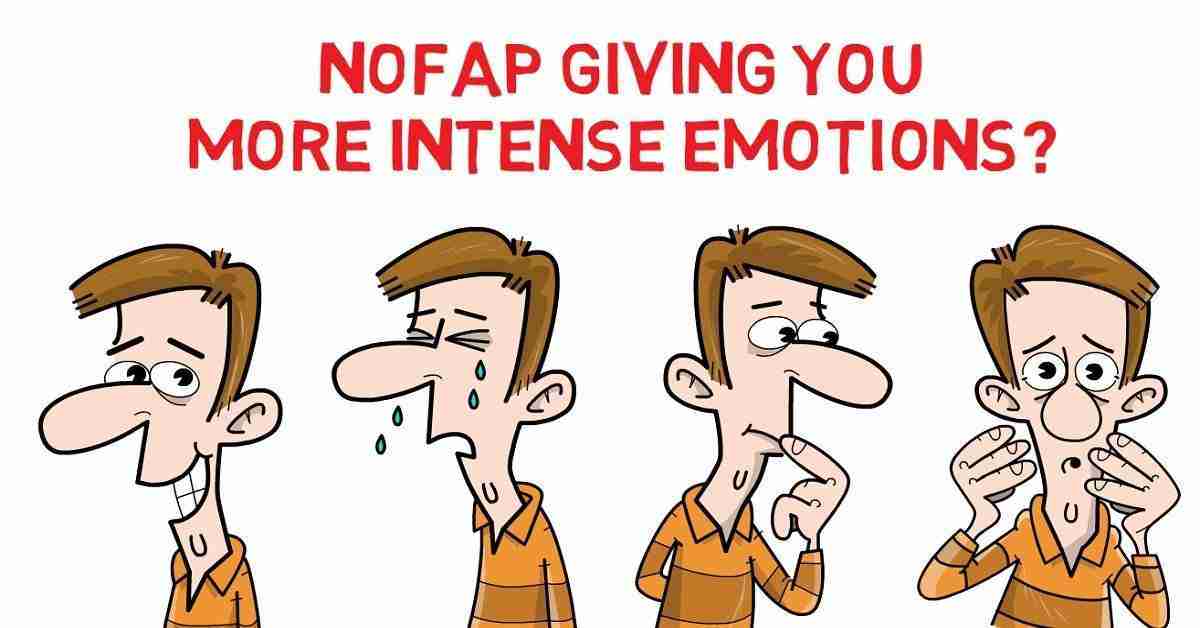 Being Emotional On NoFap

A lot of guys are going on a NoFap journey because they want to become tougher, manlier and feel more “alpha”.

So off they go, walking on the NoFap journey for a few weeks, while eagerly waiting for the “alphaness” to descend on them…

…only to find that they instead become much more emotional.

Isn't NoFap supposed to give you the following benefits?

So, what's going on here? Why do some guys become more emotional instead?

Well, many guys still experience all those listed benefits, and even more than those…

….but here's what's going on with the emotions on NoFap… 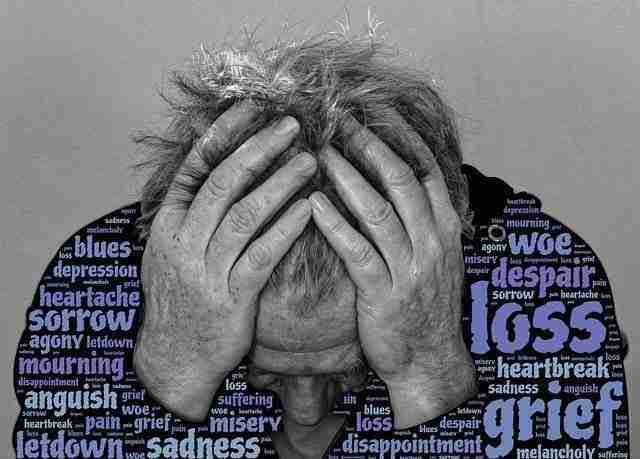 You will most likely have sharp fluctuations ranging all the way from euphoria, anxiety to crying spells and everything in between.

NoFap will definitely do something to your emotions – and this is the process:

NoFap will “fine-tune your brain”…

If you for example experience things like sudden crying spells or random anxiety, during the first few months of your rebooting, know that those seemingly random emotional spells will most likely reduce with time.

So, in the end it will stabilize, but on the other hand you will be able to experience emotions more vividly, with more intensity.

Being able to experience that child-like happiness again… 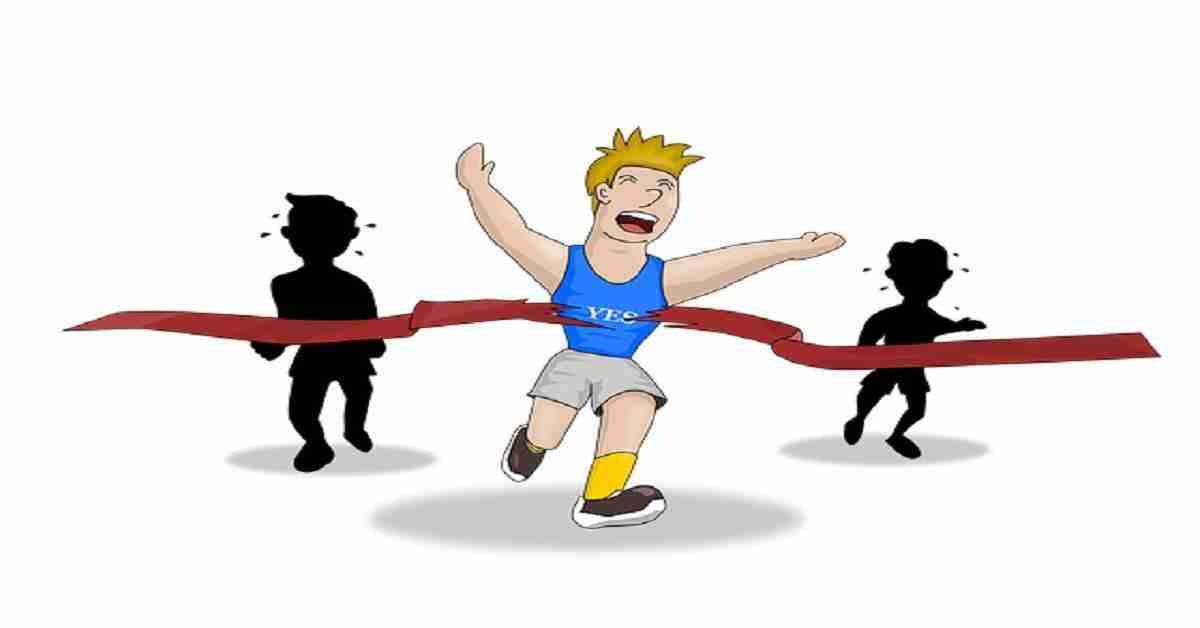 This is a good thing because who wouldn't want to feel things like; child like happiness again, or massive excitement before going on an adventure of some sort, or intense horniness when rolling around in the bed with your loved one…

…but you should also be prepared for things like being able to feel immense satisfaction just by seeing a beautiful sunset or perhaps shed a tear or two when watching a really sad movie.

In other words: after a full reboot your emotions will be deeper and more intense.

This is a good thing because, well, emotions are your life.

Think about that for a while!

What some of my subscribers say about emotions during NoFap…

I made a poll on my YouTube channel, called Project Stronger Self, where I asked my subscriber what their experiences are with NoFap and more intense emotions.

Here are the results… 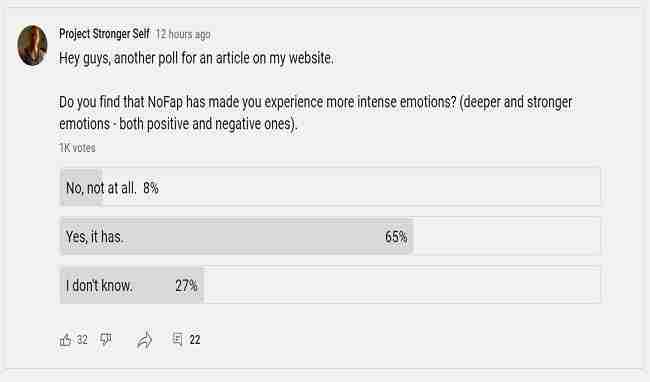 Do you find that NoFap has made you experience more intense emotions?

As you can see, about 1000 people participated and the results are…

So, a clear majority see more intense and deeper emotions when on NoFap.

The results from the poll is very much in line with I have seen on all the rebooting forums during my, now 10 years, of being part of the pmo rebooting community…

Here are som interesting comments from the guys…

Let's take a closer look at what some of the guys have to say about NoFap and emotions.

As you can see, some notice stronger emotions in general and some of them are clearly struggling with withdrawals as the negative emotions seem to be particularly intense…

“I've had streaks where literally looking at trees made me cry. Its amazing.”

“Ouf, WITHOUT A DOUBT….
For me I think it leans more on the stronger positive emotions in general. Negative emotions are there, they hurt but they usually are less crushing than before.”

“The cloudiest gloomy day becomes the most beautiful day , around day 20-30 of nofap”

“I feel overwhelming negative emotions, but I guess its part of the process 🤷🏼‍♂️ I would never consider relapsing”

“100% that's partly why I usually end up relapsing”

“I feel so aggressive and angry when I practice nofap. I also experience anxiety and depression far less though. Worth the trade for me personally.”

The flatline can make you emotionally numb

Many guys who are doing NoFap will have to power through something called the flatline.

Now, if you're not familiar with what the NoFap flatline is, then read the article NoFap Flatline – 7 Surprising Facts.

…but the total lack of libido is not the only thing that characterizes the flatline.

As you can see, all pretty grey and depressing things.

This “void-like state” often starts somewhere in the second or third week and can last a couple of weeks. However, everyone is different as some will have to power through for several months.

…I know, there's nothing fair about life.

But basically, it is indeed possible to also feel totally dead, emotionally, if you're going through the void-phase.

So to sum it all up, during the first couple of months of NoFap, your emotions can go completely crazy from all the withdrawals, or they can become very dark and empty-like because of the flatline.

If you manage to push through, however, they will most likely stabilize.

Imagine being able to experience that child-like excitement for life again!

Well, keep walking on the amazing reboot path and before you know it, you'll be there.

P.S. Need my help with rebooting? You can find my contact page by clicking here.